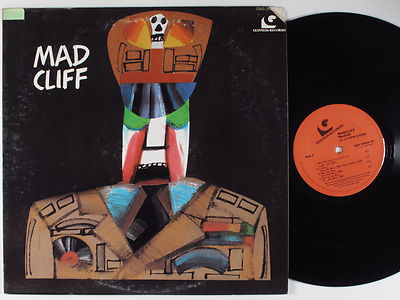 in the jungle groove

I'm not sure what the actual relationship and train of events was, but the "Mad Cliff" album seems to be related to singer/multi-instrumentalist Chris Hills and his mid-1970s New York City-based studio outfit The Players' Association. My own guess is that the eight tracks were demos Hill and company shopped around to various labels before being signed by Vanguard. That's based on the fact the "Mad Cliff" album shared two songs with The Players' Association catalog:


Add to that the fact tax scam labels were notorious for releasing virtually anything they could get their corporate hands on and even though The Players Association was signed to a legitimate recording contract, that wouldn't have stopped Guinness from releasing the demos in its possession under the guise of Mad Cliff.

Singer/multi-instrumentalist Chris Hills was the brainchild behind The Players' Association and given he was credited with penning, or co-writing all eight tracks, his fingerprints were all over this album as well. Musically the set was pretty diverse, including stabs at disco, funk, and old school soul. Hills had a decent voice (check out the ballad 'Steal Away') and at least half of the material had at least some feature that made it worthwhile.

- The Players' Association was best known for the adult contemporary oriented jazz-funk outings, so 'What People Say About Love' came as a major surprise. A blazing slice of old school soul, the track was highly commercial and with a little bit of promotion could have done well on the charts. rating: **** 4 stars
- 'I Like It' was a decent slice of funk. Nice synthesizers and a really good lead guitar certainly didn't hurt the song, though it was pretty lame in the lyric department ... basically the title repeated endlessly. Enough drinks and you probably didn't care. rating: *** 3 stars
- Propelled by some pretty acoustic guitar, 'Steal Away' was a nice commercial ballad, but somehow it just wasn't very memorable. rating: ** 2 stars
- While I'd love to be able to say something nice about it, 'Goin' To the Disco' was formula disco at its worst. Mindless rhythm with an even worse lyric, again the title track repeated to the point you wanted to scream. Unlike the earlier 'I Like It', this one was so lame and dull that it's unlikely any amount of alcohol, or other illicit substances would have been enough to get crowds on their feet. Hideous. rating: * 1 stars
Side two opened up with another slice of old school Great 1960s tune with Hills turning in one of his rawest vocals. My pick for standout tune on the album. rating: **** 4 stars
- 'Just Another Woman' was an attractive mid-tempo piece that would have been even stronger had it been arranged in a different key. Hills seemed distinctively uncomfortable stretching for the higher ranges. The other weird thing was that about halfway through the song the tempo slowed down as if two separate tracks ad simply been edited together. rating: *** 3 stars
- 'It Takes a Little Time' was another pretty, but forgettable ballad. Nice hook, but Hills falsetto was an acquired taste and the Casio keyboard squawks were cheesy. Co-writer Danny Weiss produced a couple of The Players' Association albums. rating: ** 2 stars
- Easily the toughest song on the album, 'You Can Make the Change' also served as a good representation of The Players' Association catalog blending funk and jazzy touches. It certainly wouldn't appeal to everyone out there, but had its' moments. rating: ** 2 stars.

Not the best, nor the worst Guinness label release, though you might want to check out the first couple of Players' Association LPs.
Haut